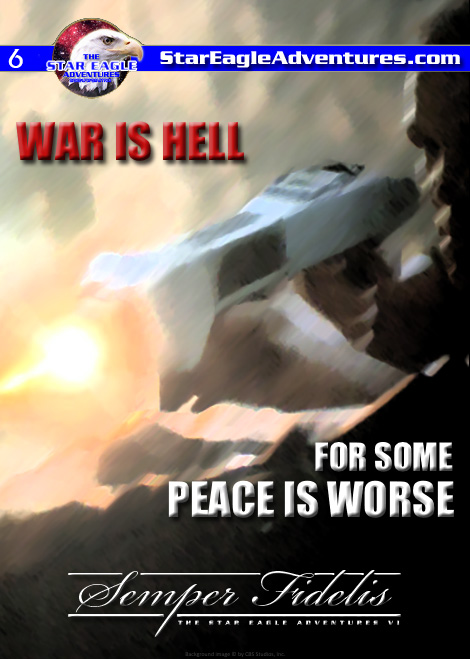 The sixth novel of the Star Eagle Adventures is now posting at the TrekBBS and Ad Astra.

“Hey, you mind if I ask you a question, Gunny?”
Arik gave him a short nod to let him know to go on.
Carvalho gazed down at the blackened, soggy, smoking wreckage of the base. “You think it’s all worth it?”
“Course it is.” There was no delay in his response, he didn’t even have to consider it. “It’s all working out exactly like the general predicted. We take their base, they send units to take it back and Fourth Battalion uses the distraction to hit them where it really hurts. It’s a thing of beauty.”
But the Brazilian shook his head, looking pensive. “I mean all of this.” He made a sweeping gesture across the horizon. “The entire damn thing, you know? Goddamned planet in the middle of nowhere. Sometimes I wonder if there’s any point to all of this.”
Arik turned to regard his friend with a surprised look, not used to hearing him talk like this at all. “Well, stop wondering right now, Marine.” He spoke in his best command voice. Then his tone softened. “Look, Thi, the general knows precisely what we’re doing here and you just gotta have faith in that,” he said. “This is war and we’re fighting for our gods-given right to exist. And we’ll take this fight wherever it may lead us. We’ll beat this thing and this godsdamned, rain-cursed planet as well. But we gotta stay focused, Thi. We gotta stay strong. And we don’t go home until the job’s done.”
“Victory through strength.” Carvalho fell back onto the battle mantra their entire regiment had long since adopted.
“Oorah!”