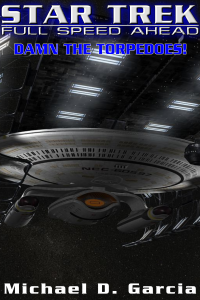 Season One, Episode One of Star Trek: Full Speed Ahead (Series Premiere/Pilot)

Stardate 43224.74: Newly-promoted Captain Krystine Leone is appointed to command the recently-refitted Nebula-class starship USS Farragut, after a mere fifteen years of excellent service to Starfleet. Her arrival at the Antares Ship Yards is met by friends she’s made throughout her career, and of course, she is excited by the prospect of her first command. While she enjoys the festivities of assuming command, two strangers work feverishly within the ship’s navigational deflector room toward some unknown purpose. As they ready the ship for warp speed trials, the ship finds itself going on a journey deep into the final frontier!

Historian’s Note: The events of this episode occur during Star Trek: The Next Generation’s third season, specifically between the episodes “Booby Trap” and “The Enemy.” Star Trek: Full Speed Ahead
By Michael D. Garcia

Episode One: Damn the Torpedoes!

The wail of the red alert klaxon could barely be heard over the trembling of the ship’s hull under her feet. The comfortable chair she sat in carried those vibrations and massaged her back, but she had no time to enjoy it. The blue-green distortion on the main viewscreen looked like a long tunnel for as far as she could see.

“Mister Aspinall, reverse thrust!” she ordered, over the din.

The young helmsman turned his head to call back, “Helm is unresponsive, Captain.” He tapped in a few more commands, but the console rewarded him with a negative response. “Braking thrusters are offline!”

“Damage reports coming in sections one through thirteen, decks six through twelve!” shouted the ops manager.

The tactical officer added, “I’ve lost weapons, and the shield emitters are offline!”

“Damn it,” the captain spat. Her right hand balled up into a fist, and she pounded it against the armrest in frustration. “Petra, divert auxiliary power to the structural integrity and inertial dampening fields!”

The result was immediate. The vibration softened considerably and the background noise level dropped enough to allow the red alert siren to be heard once more.

From her station, the ops manager nodded. “IDF stabilized. The SIF is holding steady at sixty-seven percent, but I don’t know for how long.”

“Sensor pod is offline, I’m switching to the lateral array,” reported the tactical officer. The viewscreen flickered as he switched the inputs. A few moments later there was nothing but the inoperative holographic display diodes behind the clear screen, and he added, “Sorry, sir, we lost the lateral sensors, too.”

The ship still strained under the power of whatever it was they were caught inside of. The captain continued to eye the viewscreen, hoping that outside of her ship, the end of the tunnel was coming soon.

The ship’s massive navigational deflector allowed Farragut to traverse the expanse of vacuum without the fear of microfractures caused by small objects impacting against the hull as it travelled at high velocities. From the front, it looked like a huge blue dish carrying an orange-colored serving platter. At least, it looked that way to Saleb, as they looked out from behind the darkened dish.

His companion, Belkis, stood over him one level up, wearing a rather impatient expression. Saleb gave him a sheepish grin, as he had been caught enjoying himself. Belkis thought of nothing but the mission and the objectives, but Saleb liked to seek out the little pleasures of this particular excursion. They were pretty far from home, anyway, and he would be remiss not to suck every tender bit of information he could from it.

Saleb stepped down onto the primary access level and placed his Starfleet-issued carry-all on the deck. He kneeled and touched the access panel’s control to allow it to slide out of his way. The deflector’s control computer extended like a drawer, allowing him complete access to the key component of the ship’s system.

Saleb sensed immediately when Belkis tensed above him. When Belkis turned his back to him suddenly, Saleb froze. The door to the corridor opened onto the deck above and someone was talking because he could hear the voice faintly.

Their work on the navigational deflector could not afford to be discovered or disturbed. Saleb slowly snaked his hand around the butt of his weapon. He was certain Belkis’ hand was moving toward his own concealed weapon, underneath the engineering jumpsuit worn by all the civilian engineers aboard the ship. The good-natured tone of the unexpected visitor floated down to his ears.

“Pardon me,” said the visitor. “I’m looking for junction two-one-Alpha-three. Would you happen to know where it is?”

A barrel-chested bruiser, Belkis tended to intimidate most people he met. He answered with his typical terseness, “It’s three junctions forward, one deck up.”

The door was closed from their side, cutting off the engineer midsentence. He heard Belkis’ boots on the deck and he could feel his stare on him like before.

Feeling safe enough to pull his equipment out of the carry-all, he let out a deep breath and retrieved his very unStarfleet scanning device, along with a set of packets mounted on a technical pallet. “That was pretty rude,” Saleb noted, not taking his eyes away from the control computer.

Saleb looked at the scanner in his hand. “This is not something we rush, Bel. I need to calibrate the device, first.”

Out of view, Saleb grinned. “Watch the door, will you?”

He rolled his eyes at his companion. “Relax.”

“I said relax. The ship launches tomorrow and the navigational deflector is going to pass their rather cursory inspection.”

“You keep saying that, but I think you’re underestimating them!” snapped Belkis as he rubbed at his forehead.

Saleb sighed, “We studied them for months, specifically for this mission. They do their little walkthrough, they make their little scans and they’re done.” For as long as they’ve worked together, he knew what the big man was going to do next. He grinned to himself in anticipation.

“You are an arrogant, aggravating, soulless, little man!”

Belkis threw his hands up in exasperation. “Hurry up! We have people waiting for us!”

“Did you think I forgot?”

He pointed at him from above in a dramatic fashion. “I say it because you appear to need reminding. I don’t want you running off to join Starfleet.”

Saleb showed his teeth as he smiled. He looked up at Belkis. “Starfleet could use my help.”

“Just remember that we asked you, first.”

Of the many qualities a Kasai had, humor had yet to be developed. Saleb sighed. “I’m joking.”

Belkis grumbled, “You better be.”